This summer I had a two-day shoot in Scottsdale, AZ. My wife tagged along and we stayed for five days after the shoot. After spending some time with a friend in Tucson we drove up to the Grand Canyon. We were camping at Mather Campground on the South Rim, and one night I decided to go over to the canyon to shoot some stars. It was very clear that night (June 22) with a near full moon. I went over to Mather Point Overlook and set up my tripod and camera. There were a few other people there also doing some star photography. Once I got set up and took my first thirty second exposure, I noticed that there was some strange light appearing in the image. As I looked north across the canyon, I noticed that there did appear to be some yellowish light hovering over the North Rim. I asked a woman who was with one of the other photographers if she saw it, and she said it was probably light pollution. I took another shot and the light was in that image too. The strange thing was that in the image the yellowish light I saw was appearing as pink. I had the white balance set on daylight, so this really made no sense to me — even if it was just light pollution. It also made little sense to me that there would be light pollution to the north, when the biggest nearby city is Las Vegas, and that is to the west. Then again, I’m not expert on how light pollution works. 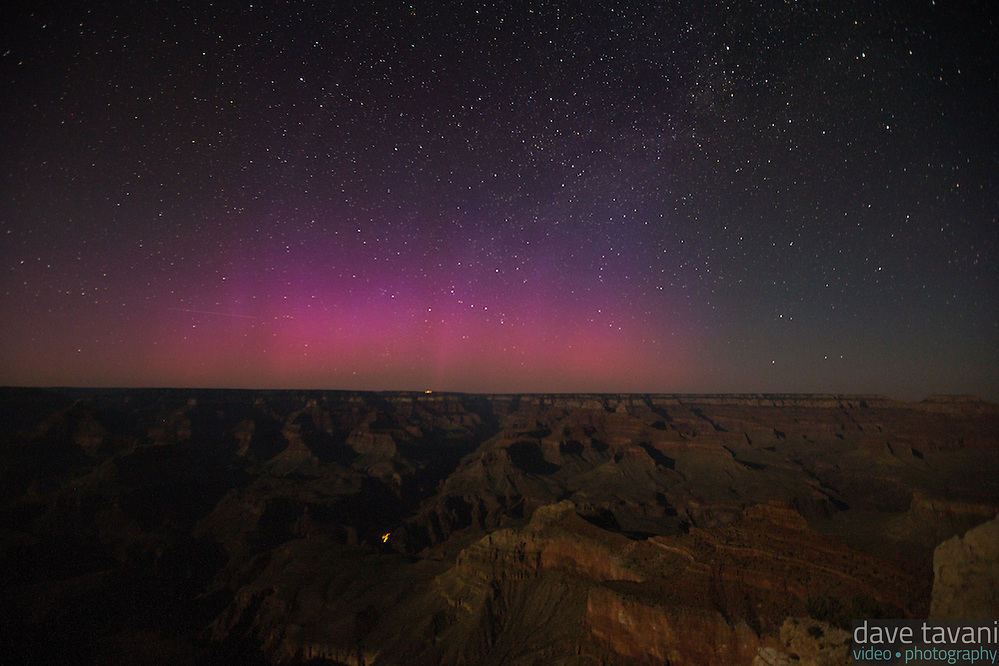 Strange light appears over the Grand Canyon on June 22, 2015, as seen from Mather Point Overlook. Is it the Aurora Borealis or light pollution? The Washington Post reported that the Aurora was seen as far south as Texas on June 22. (Dave Tavani)

After a few minutes that strange light seemed to disappear and I tried my hand at taking some more photos of the stars above the canyon. The moon had lowered below the horizon in the south and I headed back to the campsite.

The next morning I showed my wife the images on my camera. She was really curious — and a little mad. She is somewhat obsessed with seeing the Aurora Borealis. She follows an organization that posts information about solar storms on Facebook, including maps of where the Aurora will be visible. She has proposed driving north in the middle of the night to go see it when she reads that it will be visible nearby. But we have never gone to try to see it. Immediately, she asked why I didn’t come back to the campsite to get her. But she realized that by the time I packed up my gear and got her it probably would have been gone. Later that day, when we got to our hotel in Sedona, she was looking up some information about the Aurora Borealis and saw that there had indeed been a solar storm the previous night. People were reporting sightings of the Aurora Borealis all over the west, midwest, and the east in places that never usually see the northern lights. This article from the Washington Post had crowd-sourced images from all over the country showing the Aurora as far south as Fort Davis, TX. Fort Davis is further south than Arizona’s southern border. I really have no idea what this strange light was, but considering the fact that it disappeared in front of my eyes, the fact that there was a solar storm that night, and that the Aurora Borealis was seen further south than the Grand Canyon, I think it might have been the Aurora. But I guess I’ll never know for sure.

Click here to see a few shots from our stay at the Grand Canyon.