Back in July I had to fly to Seattle for a video project I was working on. This trip would mark the third time I’d traveled to Seattle. And, yet, I had never gone to Mt. Rainier National Park. The mountain looms in the distance reminding you every time you look in its direction that it is close by. When you fly into Seattle, you can see the mountain along with Mt. Saint Helens, Mt. Adams, and Mt. Hood far in the distance. So, I decided I had to go this time. It wasn’t going to be easy — I only had 27 hours in Seattle. But I had to interview an attorney at 2:00 PM, a few hours after I landed.

After the interview I kicked around the city a bit, got some dinner, went by Pike’s Point Market, and went up to the top of the Space Needle. My plan was to get to bed at an early time PDT and get up really early in the morning to try to keep my body on east coast time. I had found a short and easy hike on the NPS website and mapped the drive to the Naches Peak Loop trailhead. It was about two hours. That gave me two hours to drive, two hours to hike, and another two hours to drive back to Seattle-Tacoma International Airport, with an hour and half to spare in case something went wrong. I got up at 4:00 AM the next morning, packed my stuff, and drove toward Mt. Rainier.

Just before sunrise I stopped in Enumclaw where I saw this incredible view of Mt. Rainier rising behind a misty field. 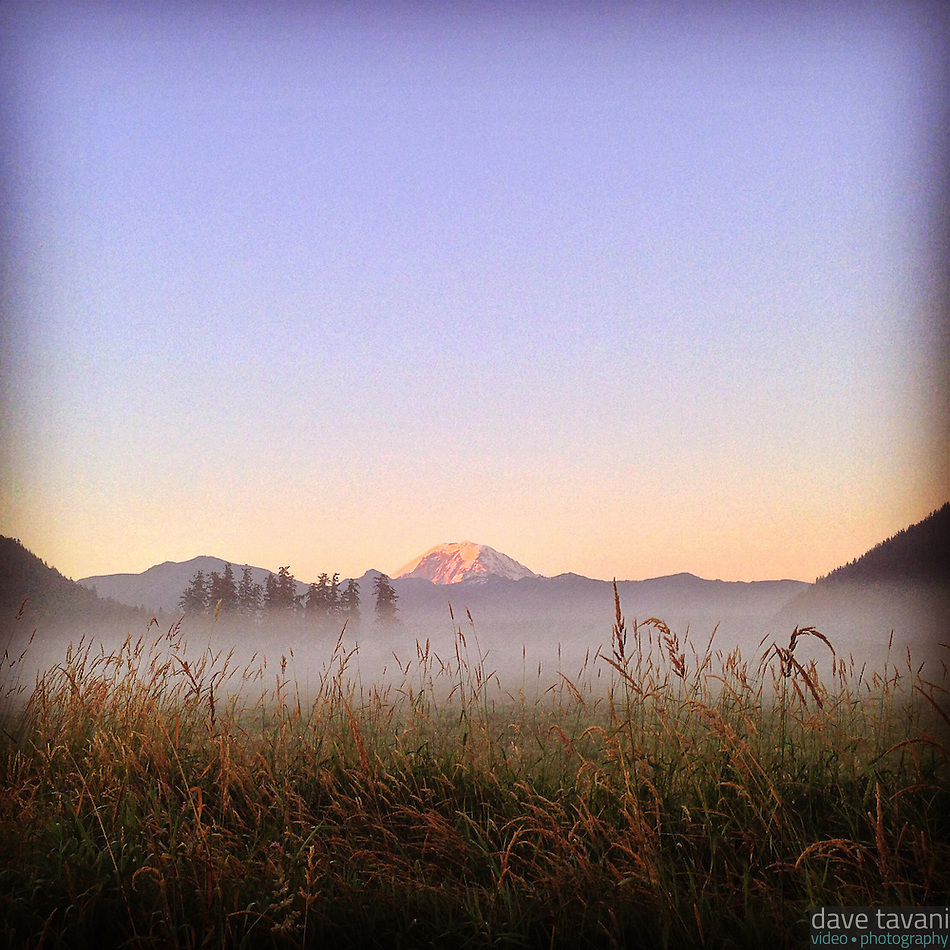 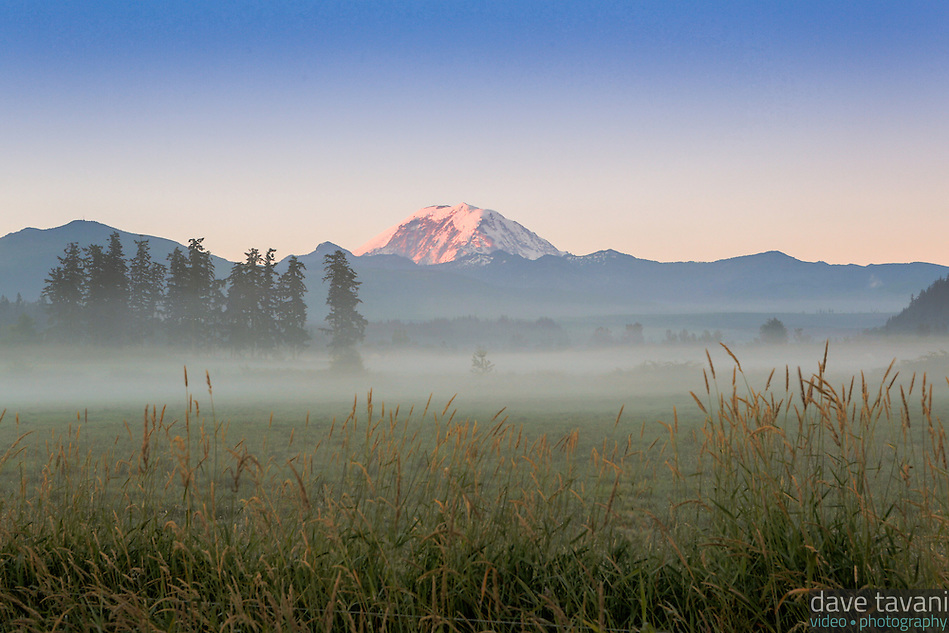 Once I got to the trailhead, I wasted no time (since I didn’t really have much to waste) and headed off.

The trail rose slightly from a small lake along the road into the snow — and then disappeared. I back-tracked, circled around, slipped, slid, and the just motored ahead to where I thought the trail went. Eventually, I found it again, and as it climbed higher in elevation the views of Mt. Rainier got better and better. 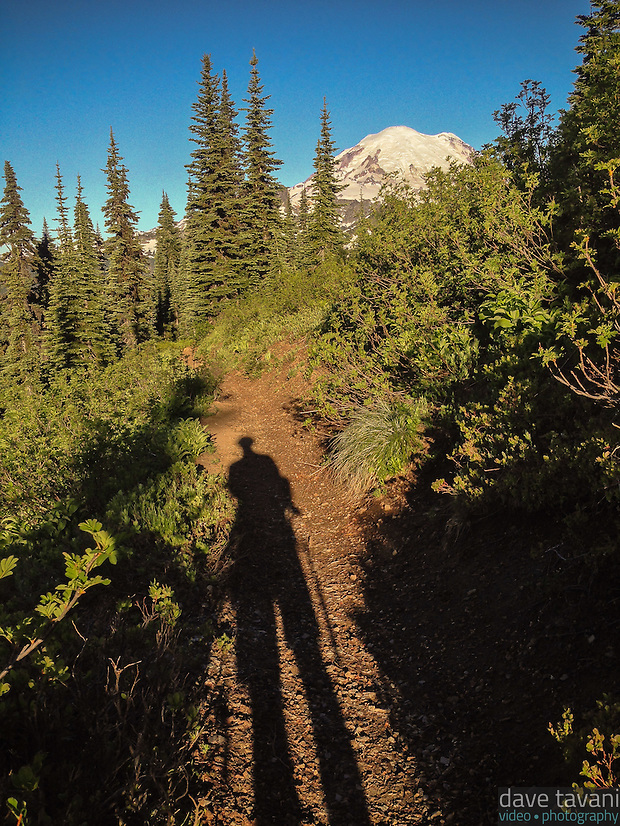 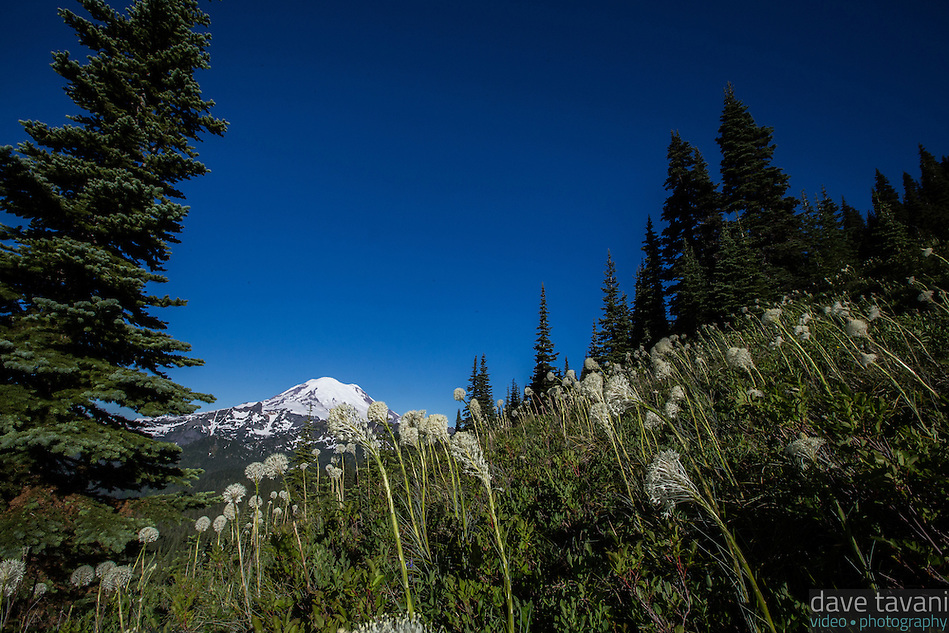 Every so often, I lost the trail in the snow, which was mostly frozen on top, and found it again. The snow definitely slowed me down, as I had rather inadequate footwear. Remember, I had read about a short, easy hike on the NPS website. Nowhere did it mention the possibility of encountering snow or ice in July on that website. But it made for a good adventure. 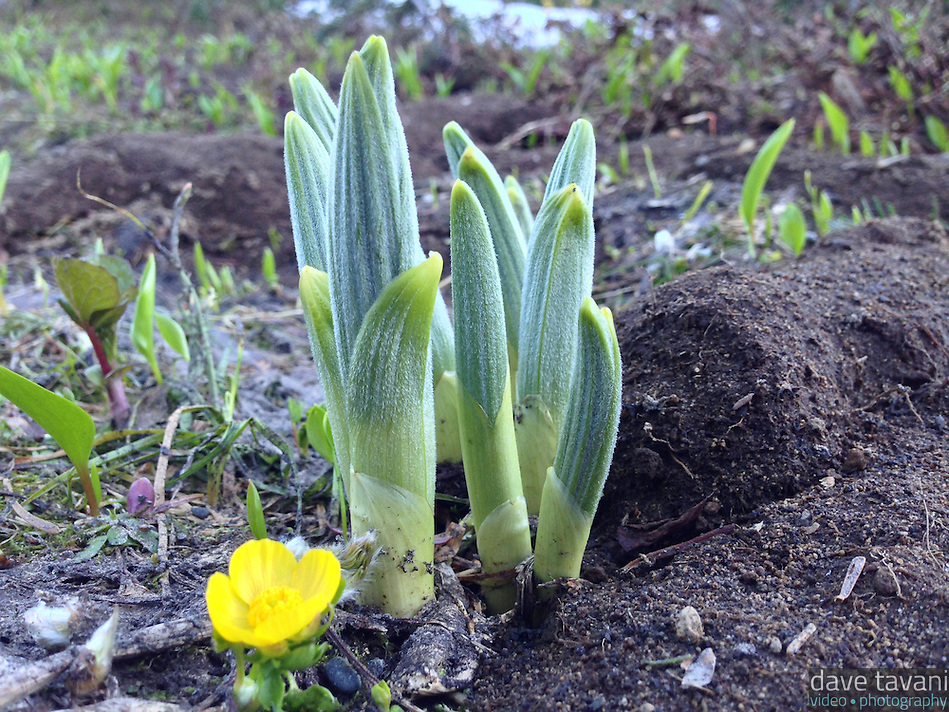 A subalpine buttercup grows next to another fuzzy plant that I was not able to identify. (Dave Tavani) 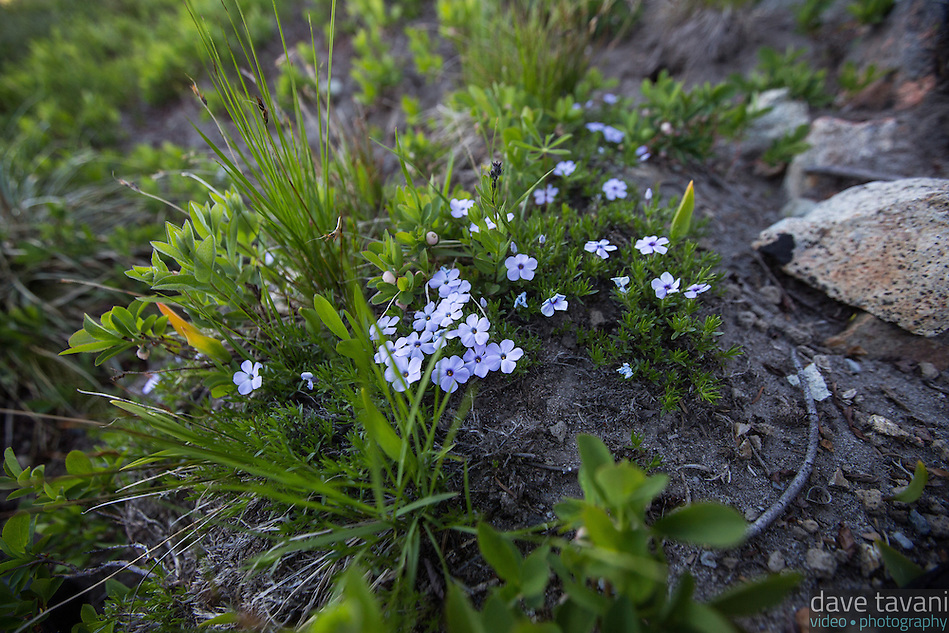 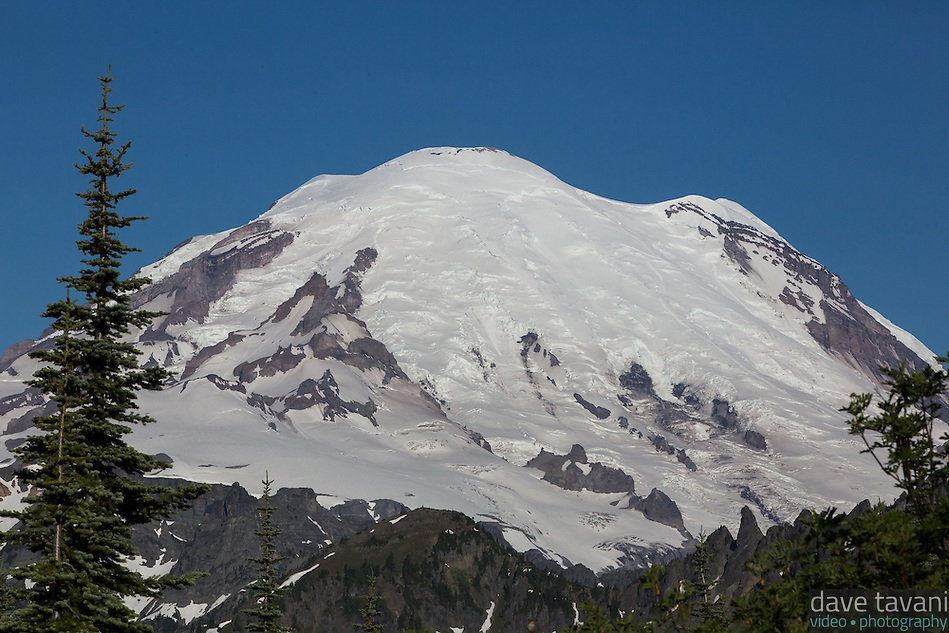 Upon reaching the highpoint in the trail, I took a 180º panoramic shot, and started my way down around the foot of Naches Peak.

A 180º view from the high point in the Naches Peak Loop Trail in Mt. Rainier National Park. (Dave Tavani)

This is where it got a little dicey. The entire east side of the mountain, where the trail joins up with the Pacific Crest Trail, was covered in snow. There was a trail there somewhere, but I couldn’t follow it. Even though I had no cell service, the Google Maps app on my phone was still showing my location and the trail. I slogged along, slipping and sliding, trying to get back to where the trail appeared to be on Google Maps. Eventually, I found it a ways past a small lake with a nice view of Naches Peak. 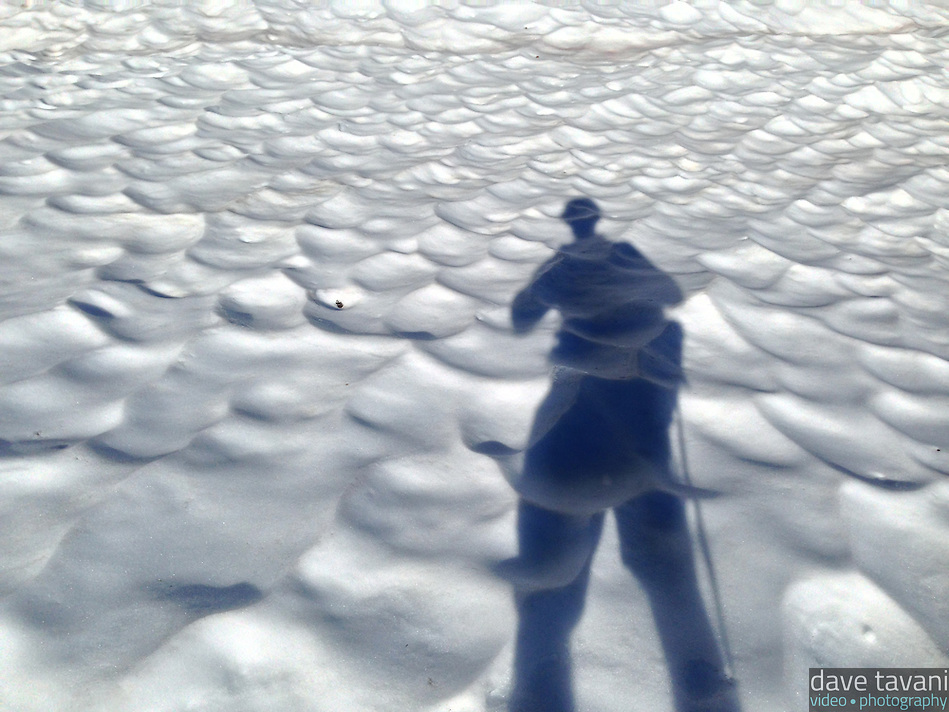 Most of the Naches Peak Loop Trail was covered in snow, which made following the trail very difficult. Additionally, the sun melts the snow during the day, and it refreezes overnight leaving a thick crust of ice on the top. Much of my hike in the early morning was quite slippery as a result. (Dave Tavani) 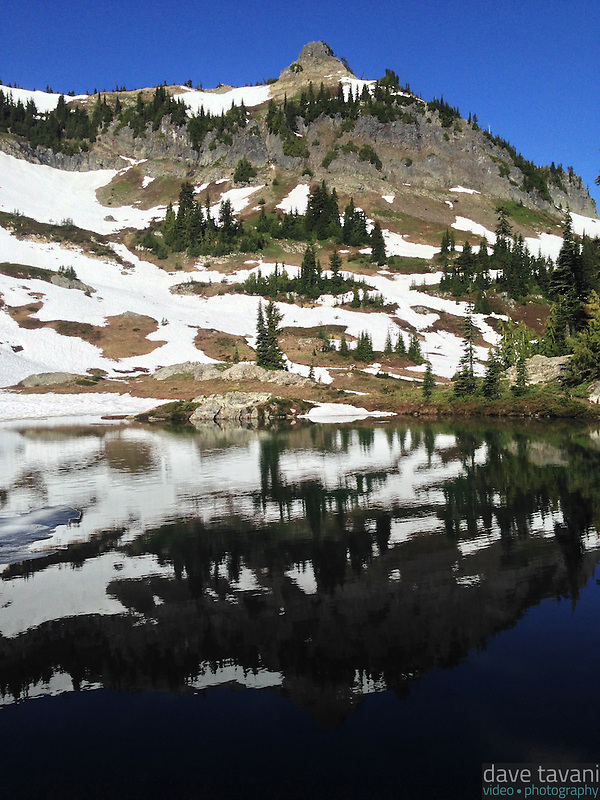 The remainder of the hike was an exercise in attempting not to fall or slide off the trail. To the  left of the trail was a pretty steep upward incline, while to the right was a pretty steep downward incline. And snow and ice completely covered the trail. Movement forward was slow and required exorbitant expenditures of energy. I scrambled along on all fours breaking my fingers through the layer of ice and into the snow to stabilize myself and stopping every few minutes to let my fingers warm up (I had no gloves with me). All the while I kept checking the time on my phone, since I did have flight to catch.

About three hours after I set out on the trail, I reached the Mather Memorial Parkway. The Naches Peak Loop crosses the road and slopes down to Tipsoo Lake before reaching the parking lot where I had parked. I opted to just jog down the road in order to save time. I made it to the car with two and a half hours to get to the airport. I hit the road and made some good time. I even had enough time to eat some lunch in the airport before boarding my flight and saying my last good-bye to Mt. Rainier from the air.

Click here to view a full gallery of images. 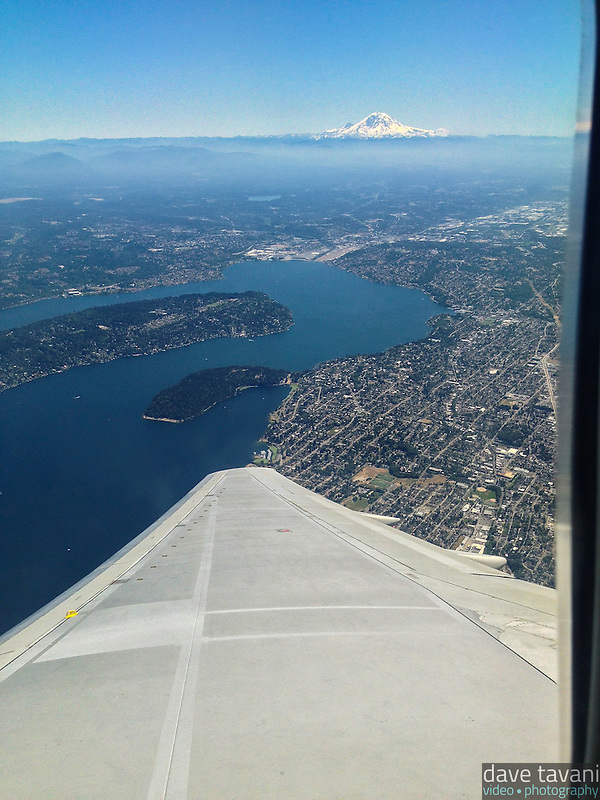 Mt. Rainier sits on the horizon as my plane departs from Seattle-Tacoma International Airport. (Dave Tavani)